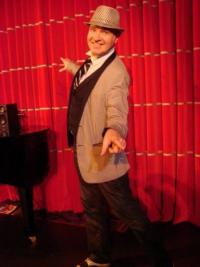 THE SHOW MUST GO ON with PATRICK HONORE

Patrick Honoré account without doubt among the first French experts in the field of American musical theater. Initially specializing in dance, Patrick started his career by the creation of the company Guys & Dolls in 1987 for the festival of Voiron, where she won the first prize. The company, still active today, is composed of 6 to 10 professional dancers Parisians, also singers and actors.

Starting from the dance, Patrick is interested in singing and quickly becomes one of the loving Crooner more accustomed piano-bars Parisians. Thanks to its unbeatable scholarship in the history of Broadway, its directory of American songs is colossal, and this allowed him to instantly find a common language with all pianists-accompanists of Paris.
His show paying tribute to the musical comedy is for him an opportunity all his talents in the same program - song, dance, the show, recreation ... in an excellent mood!